Matrimony in all parts of India is usually a grand event which people celebrate enthusiastically. It feels as if the marriages celebration rituals come straight out of a fantasy romance novel. Every part and each community of India has diverse ceremonies, traditions and wedding rituals that make it stand apart from the other countries. When we talk about Telugu Brahmin matrimonial, they are undoubtedly a class apart. This is just because of the presence of quirky quotient in it. Everyone loves to attend Telugu matrimonial due to many reasons and the quirky quotient is one of them.

If you are looking forward to appearing at a Telugu wedding shortly, be prepared to get involved in a very long ceremony packed with rituals and rites. You will be witnessing to a whole lot of peculiar practices along with some loads of sumptuous food as well.

Read on to discover some of the peculiar practices and get enthralled before joining it.

1) The bride arrives at the mandap in a basket.
Yes, it is true and peculiar to know that the groom is found seated at the altar and the bride arrives in a basket in all her glory. That basket is being carried by the bride’s uncles and brothers. It depicts as if the family is offering the bride to the groom in a basket. That is supposed to do for making a fun and entertaining exercise. The bride is showed off on her way to the altar, decked in gold and wearing a flower braid.

2) Sticky blessings are given and received
At the instant of the auspicious time or Shubh mahurat, the Telugu Brahmin Matrimony Grooms and the brides sit opposite to each other, facing each other. There exists a curtain that separates them to make sure they cannot see each other. Just as the curtain is slowly removed from their middle, both place a leaf on each other’s head. These are betel leaves, containing a mixture of cumin seeds and jaggery. This ceremonial indicates the eternal bonding and ties between two individuals. It is an indestructible bond for their Telugu Matrimony life to come.

3) The groom decides to flee with cold and bare feet
This ritual is one of the essential rituals in Telugu Matrimony, usually known as the Kashi Yatra. The groom fantasizes to renounce all the material allures of the world, tries to go to Kashi for living life of a rishi. Then the bride’s brother comes and mocks pleads with the groom to reevaluate his decision and marry his sister. After much persuading, the Telugu matrimony groom “agrees” to marry his bride and the wedding rituals continue.

4) The wedding games
It is no secret that Telugu Brahmin Matrimony inclines to go on for a very long time hence, there are numerous games assimilated into this period of matrimony celebration to keep everyone tickled. One explicit game, which is also a ritual, includes the Brahmin matrimony groom and bride showering each other with handfuls of rice grains during the recital of prayers by the priest.

Well, these are some weird yet quirky rituals. Aren’t they? These usually take place in every Telugu weddings which make guests enticed for a whole long period.

If you loved these matrimony rituals and have planned to get into a Telugu marriage, then start looking for your life-partner from South India. Looking for a Telugu life partner for yourself is easy if you avail the services of Telugu matrimonial sites.

Telugu Brahmin Matrimonial sites have helped people abundantly to find their soulmates throughout the world. Why are you waiting then? Join it now! 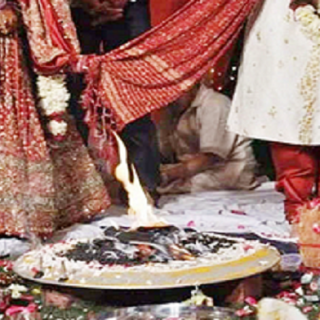